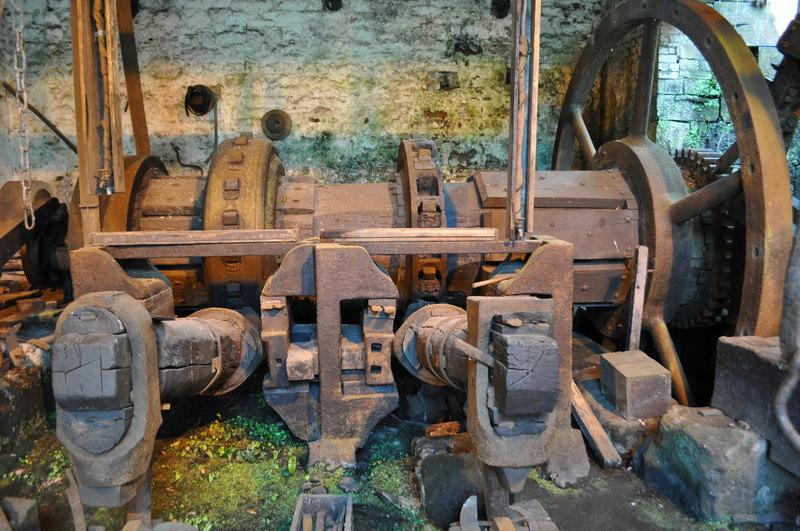 “…in terms of the actual nature of Sheffield if you like, the existence of Sheffield, it’s largely due to a combination of the natural resources being available, but of course the exploitation of those natural resources as driven by water by the fact there’s seven hills, five rivers. All those rivers used to be full of grinding hulls, water wheels, water wheel driven grinding hulls and all the industry was coming down those valleys, and indeed where you’re sitting now is a manmade island, which was produced by water-power.

The first mill race or goyt off the River Don, the River Don is over there, the mill race over there and the first one was taken off in the 12th century to create a corn mill for the Lord of the Manor, and then later on it became a home of the town armourer grinding the weapons and so on in the 1600s I think it was, a guy called Kelham Homer, hence it became known as Kelham’s Island and eventually Kelham Island as it is now. And then it went on to drive several water wheels for a cotton mill, a silk mill and all sorts of other things in the area. So where you are is an expression of waterpower and why Sheffield is where it is and why Sheffield is where it is and why Sheffield grew.

So the actual historical link between energy and manufacturing here is absolutely complete and obviously from that linkages across the world with bar iron coming from Sweden, to Abbeydale, which Alex has referred to, which is again, if you like, a very early water-powered factory. Now, the thinking there is that in fact the story of power, of energy and manufacturing at Abbeydale, goes back to also the 12th century or… I can’t remember the exact dates of when Beauchief Abbey was founded, because the monastic movement in Europe, particularly the Cistercians who still exist and still do this, were in effect a multinational company with technology transfer going across Europe, always manufacturing, always becoming a centre of industry and agriculture. And although the Beauchief Abbey was not Cistercian it was founded by a chap who was a friend of the chap who founded the Cistercians. The names escape me at the moment. But almost certainly they will have had water wheels driven by the River Sheaf at Abbeydale and so that is an early factor. In fact Abbeydale itself is, again, an absolute microcosm of this link between energy manufacturing. Because there what you have is an integrated factory producing size and edge tools and so on that has two big water wheels which drove tilt hammers and a grinding hole, two small water wheels, one which drove boring machinery for drilling holes and one which drove the blowing engines to drive the furnaces. So you can see there that all of those things absolutely interlinked with the concept of energy manufacturing. And of course the Little Mester, which again is a thing in Sheffield, they were originally in the valleys up the hills if you like.

The next phase of energy in Sheffield was again represented here, which is steam power, because it was the development of steam power that enabled the big industry to come to Sheffield and fill the valley, the valley bottoms in the Don and at the Don Valley and the big steelworks and so on, that was steam power. And of course we have the most powerful working steam engine in the world, which I never cease to remind the Chairman