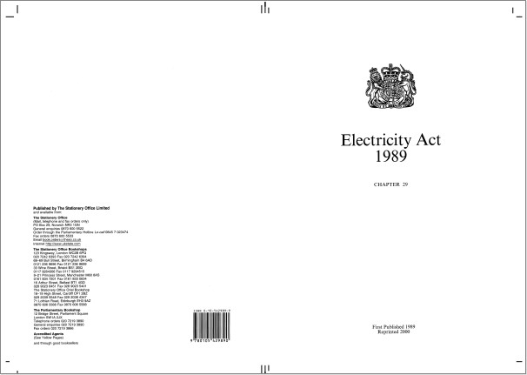 The UK had seen a wave of privatisations over the previous decade, with energy giant BP privatised in 1979, and privatisation championed by Conservative politician Nigel Lawson - first in his role as Secretary of State for Energy and later as Chancellor. In a 1982 speech, Lawson had laid out his vision for the energy sector: Government's role was "to set a framework which will ensure that the market operates with a minimum of distortion and energy is produced and consumed efficiently." The government argued that competition would lead to greater economic efficiency and lower prices for consumers - the white paper stating the aim was to "create downward pressures on costs and prices, and ensure that the customer comes first".

Until privatisation, electricity supply in England and Wales was the responsibility of the Central Electricity Generating Board (CEGB), a state-owned regulator that generated power and managed the grid, supplying electricity to a series of area boards that in turn provided power to consumers. The Electricity Act enabled this system to be radically changed, with electricity generation and supply sold off into private ownership.

The white paper suggested splitting the CEGB into two competing generating companies, establishing a limited form of competition while retaining institutions large enough to manage a nuclear power programme. However, the challenge of dealing with the UK's expensive and ageing nuclear power plants forced a rethink that would keep nuclear generation in state hands.

In 1991 the CEGB was split into three generating companies - PowerGen, National Power and the state-owned Nuclear Electric, which took responsibility for the UK’s nuclear power plants. The separate National Grid Company was created to take on the running of the electricity grid, and three further companies were created to manage electricity generation in Scotland - Scottish Power and Scottish Hydroelectric, and the state-run Scottish Nuclear. British Nuclear Fuels Limited (BNFL) was established to deal with nuclear fuel and decommissioning. Local area boards were sold off, becoming local electricity supply companies. In 1980 the state had owned the electricity, gas, coal and nuclear industries, as well as having a major investment in the oil industry. Twenty years later it retained just the nuclear holdings that were too unattractive for private companies to want.

REORGANISATION OF THE INDUSTRY

(2) Subject to subsection (3) below, the Secretary of State may, after consulting the Area Board concerned, by order nominate for the purposes of subsection (1) above any company formed and registered under the Companies Act 1985.

(3) On the transfer date each company so nominated must be a company limited by shares which is wholly owned by the Crown.

(4) The Secretary of State shall not exercise any power conferred on him by this section or sections 66 to 69 below except with the consent of the Treasury.

(5) In this Part “supply company” means a company nominated for the purposes of subsection (1) above.

(2) It shall be the duty of the holder of a licence authorising him to transmit electricity— (a) to develop and maintain an efficient, co-ordinated and economical system of electricity transmission; and (b) subject to subsection (3) below, to facilitate competition in the supply and generation of electricity.

(3) Subsection (2)(b) above shall apply in Scotland in relation to a person who is also the holder of a licence authorising him to supply or generate electricity as if the duty to facilitate competition in the supply or, as the case may be, the generation of electricity were a duty to make his transmission system available to his competitors on terms which neither prevent nor restrict such competition.

(4) For the purposes of subsection (3) above a person’s competitors are any other persons authorised (whether by a licence or exemption) to supply or, as the case may be, generate electricity.